All breeders have a kind of strategy. Possibly the only thing we could all agree that we would like to have healthy puppies, a healthy breed. That is why I do not like to emphasise separately how important health is in breeding for me, as this should be obvious, and without this we do not think about breeding. But for a clearer understanding, especially for the KBB dog owners and future owners, here is a short summary what we do/what we can do for it.

At the moment the most easily available and best organized health test is the X-ray based hip test, which was also the requirement for breeding for a while. The Hungarian Pet Orthopaedic Committee (Kisállat Ortopédiai Egyesület) gives the results based on standard procedure and evaluates in 5 groups between A to E. HD-A, HD-B and HD-C are suggested for breeding. Besides the hip test, elbow and the shoulder X-ray tests can be done and evaluated by the central committee. The knee-patella test is a bit more subjective, as it is a physical examination for the possibility of luxation. (0-not possible to dislocate, 1-it is possible to move the patella with force, but returns, 2- it is possible to move the patella with force, not returns and 3-the patella is already dislocated). 0 or 1 degree patella dogs are suggested for breeding.

Unfortunately DNA health tests are not available for mudis at the moment. So for example PRA or other eye illnesses can't be genetically tested, only a clinical examination can be done. This only tells us the current status of the dog, but the results are only valid for a year, so its value is limited. (The only available DNA test is for colour inheriting, but we are not using this routinely.)

The topic of epilepsy frequently comes up, whether mudis are a compromised breed or not. Even “specialist” vets say they see lots of ill mudis. When an affected mudi turns up, it usually causes a great scandal and some people want to demolish the whole line immediately, where this single mudi originates. So what is the situation really?
In the human population in Hungary it is said that the occurence of epilepsy is 1-3%. What does this mean? In a population, where there is no inbreeding, as it is extremely rare that people marry their relatives, there will be at least 1 ill person from 100. Even though there is no one with epilepsy in the family and the parents do everything to avoid any illness. Unfortunately, complications at labour-birth, premature newborns and hypoxia around the birth are the main factors that cause epilepsy. So going back to dogs and taking a famous stud who had more than 50 offspring, having 1 ill dog among them is considered "normal", even if there is no genetical problem in the population. It is much more risky to adopt a mixbreed or B registered dog, as we do not even know the grandparents and their health status. Based on the above, it would be important to collect information about the circumstances of the birth of the affected dogs, as it is more likely that we will find useful informations here. Breeders should pay attention to the circumstances of the birth, record the details, so if there is any problem in the future, they could always look it back and make the conclusion based on it.
The other very important part of the diagnosis (which is important for the whole breed) to have autopsy for the died ill dogs to be able to establish or rule out the chance of epilepsy. Even if it is a hard decision, because we are emotionally attached to our pets, autopsy should be mandatory, especially for those who care about the future of the breed. An other problem is, which causes uncertainity, that in a lot of cases no EEG (under seizure) or MRI examination is done. Besides, there are lots of misbelieves about the seizures. For example seizure after anaesthesia is considered epilepsy, though this is a possible side effect having no connection to epilepsy and it requires no treatment. Many times, there is another illness behind the seizures, such as tumour, vascular episode, infection, or metabolic disorder, which, if the diagnosis is correct, can be treated and there is no connection to the primary epilepsy. Sometimes epilepsy is diagnosed without any seizure, based on behavioural problems (once I heard, that a frontal lobe epilepsy was diagnosed without examinations, just because of a behavioural change), but it is important to know that a lot of things can cause a behavioural change. With such a sensitive breed like the mudi, behavioural changes or problems are often caused by the owners, changes in the family, personal problems in the owner's life, a conflict at home etc. Like in a family, where parents are divorced and their child starts to have bad grades in school...
Starting a medical treatment after a diagnosis like this, often gives us a false positive result, as the blunt dog seems to feel better, so we consider the diagnosis appropriate. So owners have to complain "right" in order to receive a correct diagnosis, and we can't expect any specialist to know our breed and even our family problems. To sum it up, epilepsy is luckily a rare illness, but it causes a huge panic, so big, that we often get further and further away from the key points of the issue. I can say as a good advice for all of us, do not breed with an ill dog, if any problem comes up, we should observe it carefully before starting to panic - or not to panic at all -, observe the circumstances of the birth, and if a dog dies of the illness, perform an autopsy. All in all, we have a much bigger chance to have dementia at the age of 60 than to have a mudi with epilepsy (statistically).

In our dogs' lineal relatives and among their descendants there is no suspected epilepsy.

We can happily report that we did not have any serious illness among our dogs. There were 2 big accidents: Borcsa was hit by a car, having serious injuries, but recovered; Duci Dézi had an accident on an old bridge where her leg got stuck and broke, but now she is healthy again. Cserfi was operated after a knee ligament injury, as her owner started agility very young and made her jump at 4 months of age. She is well now, she has a new, experienced owner, does sport actively and there is no suspected inheritance in her case either. After this we made a recommendation for our future owners about early physical activities with young dogs, and we give this to them as an attachment of the contract. Hopefully we can avoid similar problems in the future, as illnesses happen and it is our responsibility to do everything we can to avoid them. 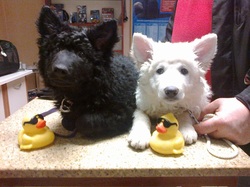 During 5 years in 11 litters 52 puppies were born. Following health problems were experienced:


-Serious hereditary disease was not experienced.
It is planned to have a Health tab at each litter containing any health problem and also the health tests the litter has.